1963: In the meantime, our interest in a powered radio-controlled model grew again. In the “Modell” magazine we saw the picture of the “Tele-Pilot”. It was a design of Heinz Siegle and offered by the “Engel-Modellbau” company (it no longer exists today). At the Vietzke model shop we found the “Engel”-catalog and we ordered the kit. Here is the page of a later catalog. The price was not too high. It was a bigger model with a 65 inch wingspan and a large dihedral. We were convinced that this model had to fly well. In our opinion this big plane needed a big engine. So, an OS-Max 29 with 5cc displacement was ordered.

Since our garage was now occupied by our car, it could no longer be used as our workshop. Fortunately we were able to free a corner in our cellar room and install a workbench there. When the kit arrived, we started the assembly in our new cellar workshop. It went together without any problems. The following picture shows the completed uncovered frame without radio and engine installed: 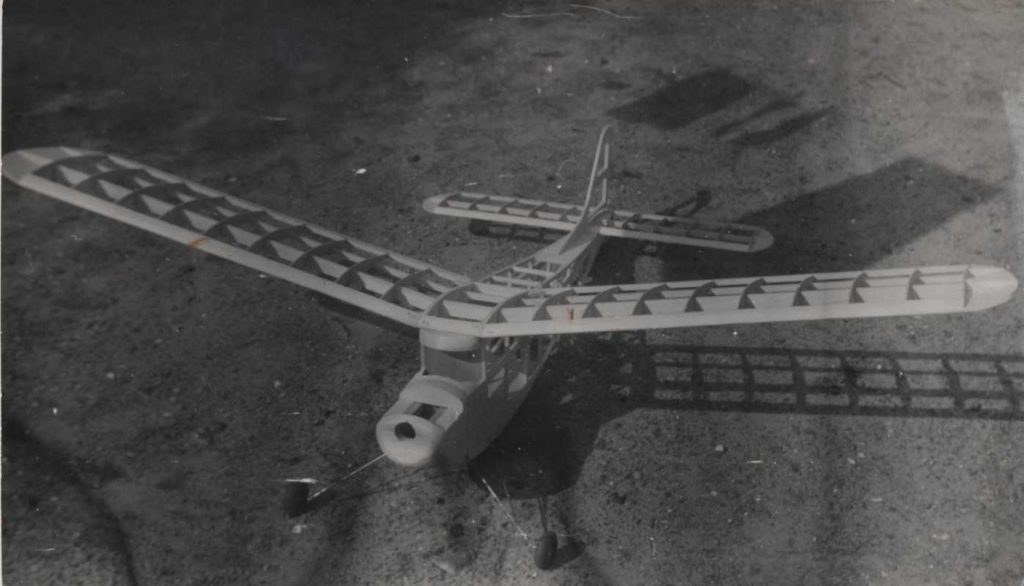 The next picture shows me presenting the frame in front of our chicken house: 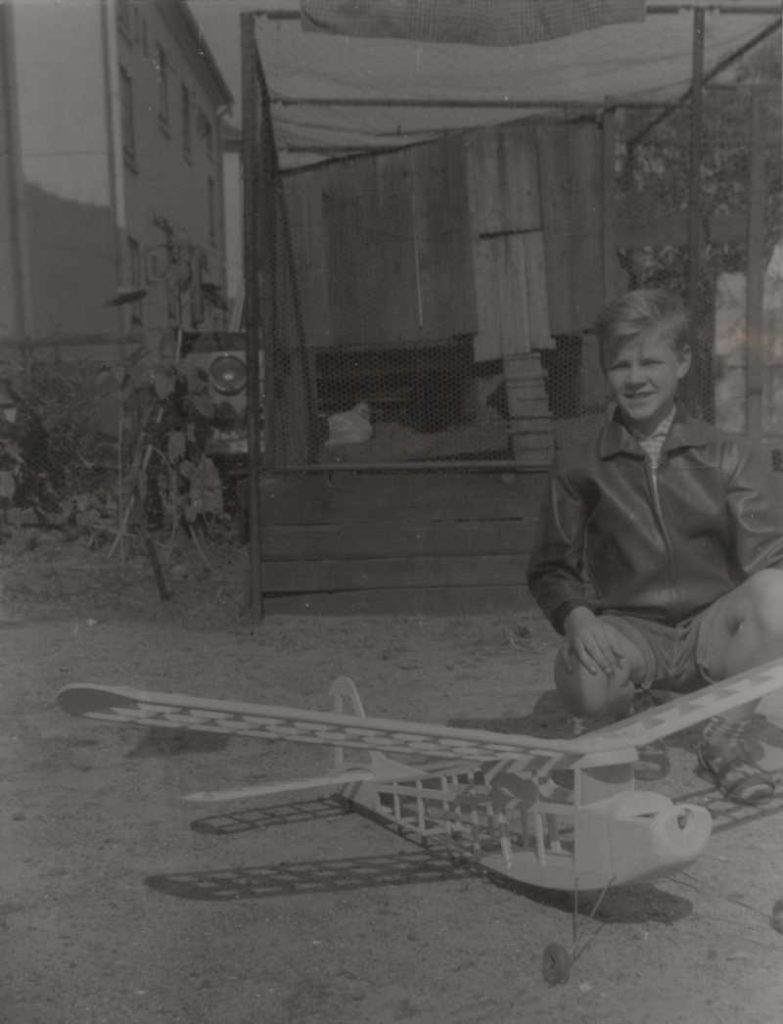 The frame presented by me (wearing the famous Lederhosen) in the backyard of our house: 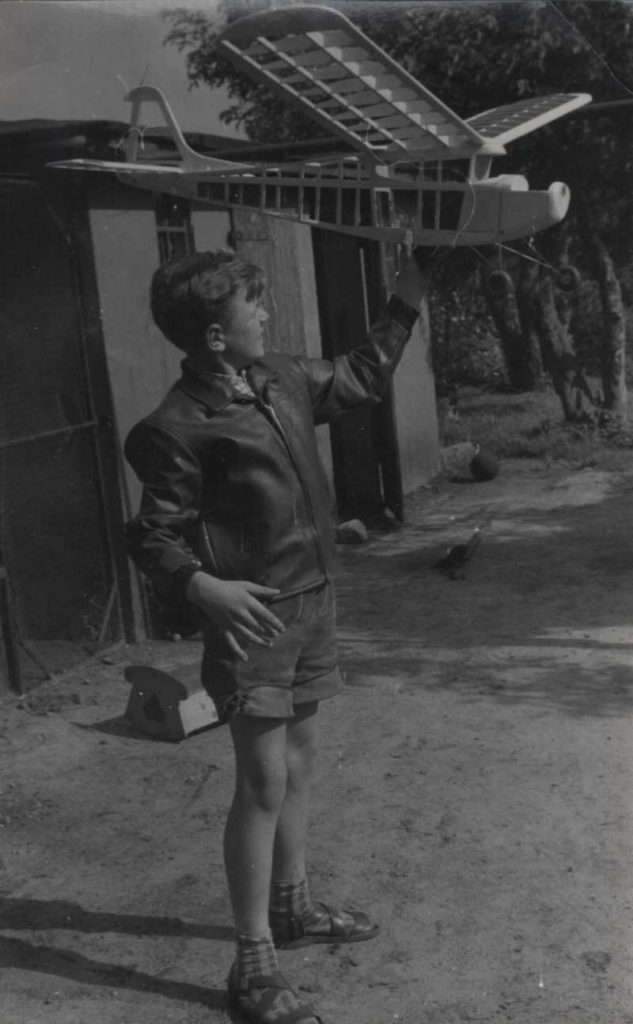 It was an impressive model for sure.

A few weeks later we proudly carried the model to our local grassland “airfield”. Of course there were some curious spectators again. We made some initial hand starts without the engine running. The model glided smoothly like a sailplane. The center of gravity and the longitudinal dihedral angle were obviously correct. We dared to try the first powered flight. The engine was started without any problems. We tested the radio (Metz-Mecatron) and it worked flawlessly. The engine could be throttled by the third channel of our radio. Push the button: engine idling. Push the button again: full speed. The next picture shows the model just prior to the first flight. I hold the transmitter, my father gives commands and the son of our neighbors, Holger Tamm, assists us. 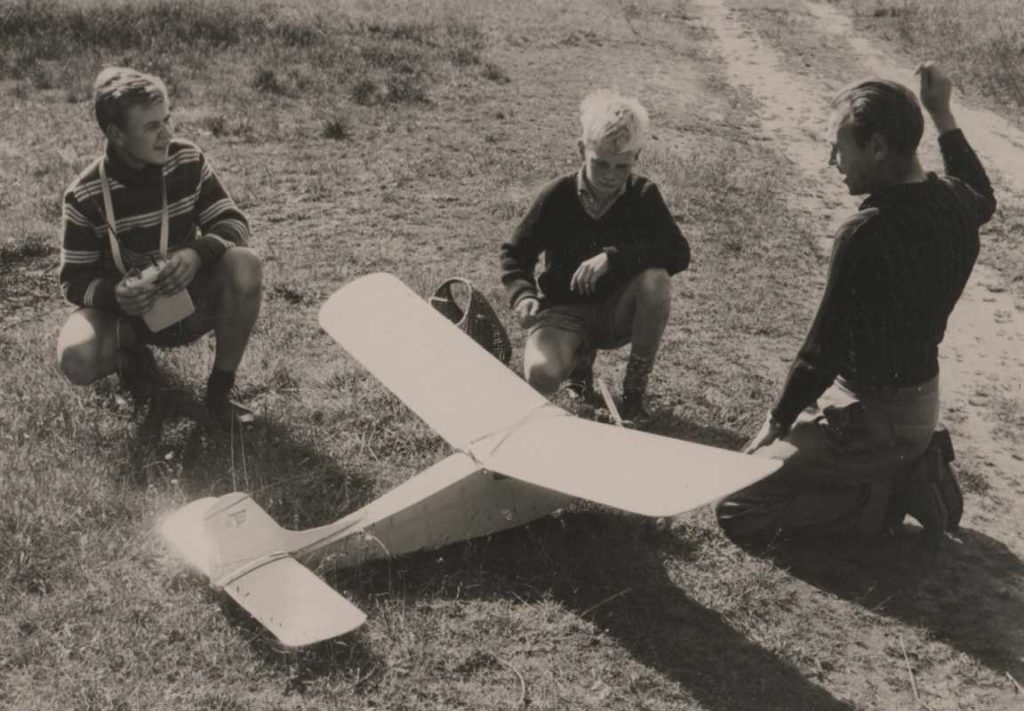 I took over the transmitter, my father threw the model in the air. It went up straight, beautifully and evenly. It responded to the rudder instantly and so I let it make a big left turn. In very short time the model reached a height of about 100 meters. What a beautiful sight. When I thought that it was high enough I pushed the button for low engine throttle. That worked well and the engine slowed down. But even in this throttled down position, it still had so much power that our model continued to climb. Obviously we had too much engine power. Our OS-Max 15 would probably have been sufficient. But how should I get the model down now? We couldn’t let the model climb until it was finally out of sight.

The tank was still rather full and we had no elevator control. I got the idea that a spiral dive would be the right method to get the model down. So I gave full left rudder. The spiral began and the model quickly lost height. I put the rudder back on neutral to end the spiral but the model didn’t want to recover. It did not even react on full right rudder. The spiral continued. Eventually the model disappeared behind a house and could not be seen any more. We didn’t hear the crash but it was clear: the model hit the ground somewhere. Great horror! We quickly ran in the direction where we suspected the impact would be. Behind a couple of houses we eventually found the debris in a ditch between a front yard and the street. 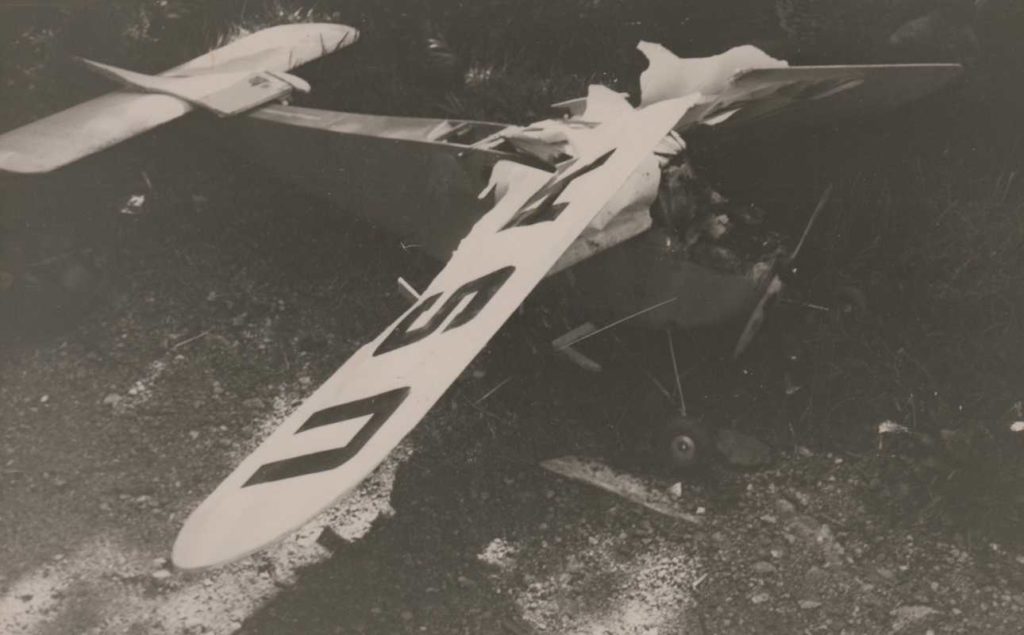 In our opinion this was beyond any repair. With the experience I have today I would have repaired it. Despite the total loss, we were still rather lucky. The model could have hit the roof of a house or injured or killed a person.

In retrospect, it was also clear to me that our “airfield” in Elmshorn would have been too small anyway for an orderly landing approach. We decided to make our next attempts only in Kaltenkirchen.