There was a special reason to start this project. I had not flown any contests since 2001. On October 7th 2021 Marc Schneider initiated a WhatsApp group called “RC4-E” and invited pilots to this group who had flown this class in the 80s and 90s of the last century. The idea was to organize a meeting and to fly a contest to the original rules just for fun. More and more participants in the competitions of that time found out about this group and became part of it. In the end the group had 12 members. Everyone was very enthusiastic about this idea and proudly showed their models that they wanted to participate with.

Now my problem became obvious: All my models that I had used in those contests were either damaged or in very bad shape. The only solution was: I had to build something new. The scheduled time for the meeting was late May 2022, so I should have plenty of time to build a new model.

I first went down to my workshop in the cellar to find out what material was still there. Balsa wood and plywood in various thicknesses and pine strips  were available in sufficient quantities.

Then I found the pod and boom for a fuselage which were given to me by Enrico Vettermann in 1990. They were still waiting for a good use.

In the same year I had produced a pair of rib blocks for my father as a gift for his 69th birthday. Sadly, my father died in January 1991 and could not make use of them any more. The ribs were still laying around in my workshop in a plastic bag in perfect condition. I decided to use them now for my new model. 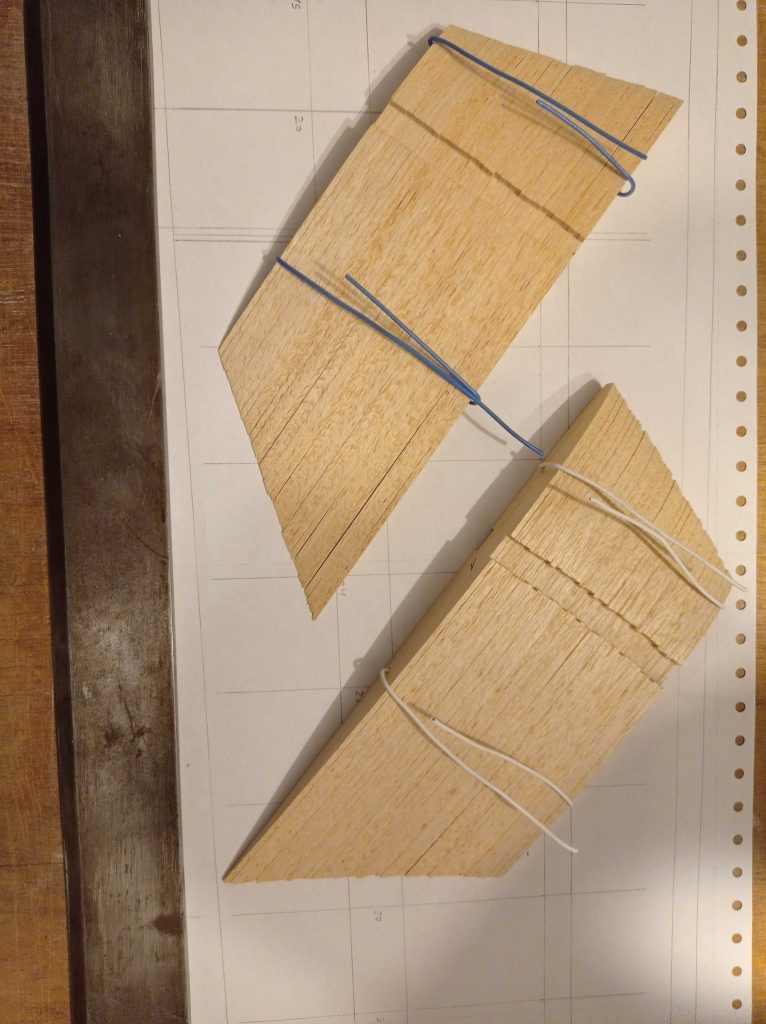 The airfoil was a Clark-Y with reduced thickness of 10 percent. 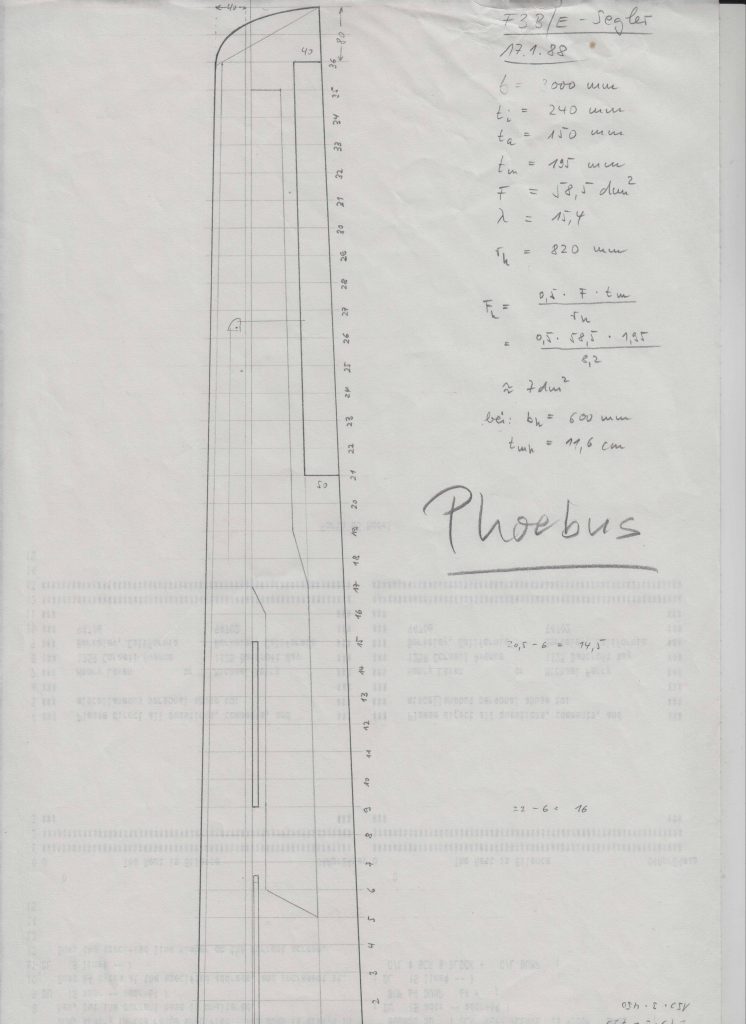 I made a drawing of the right wing in original size. Fortunately, I had a lot of old endless printing paper that was very suitable for this. To start building, I glued together the lower skin of the wing (balsa 1.5mm; ~1/16″). 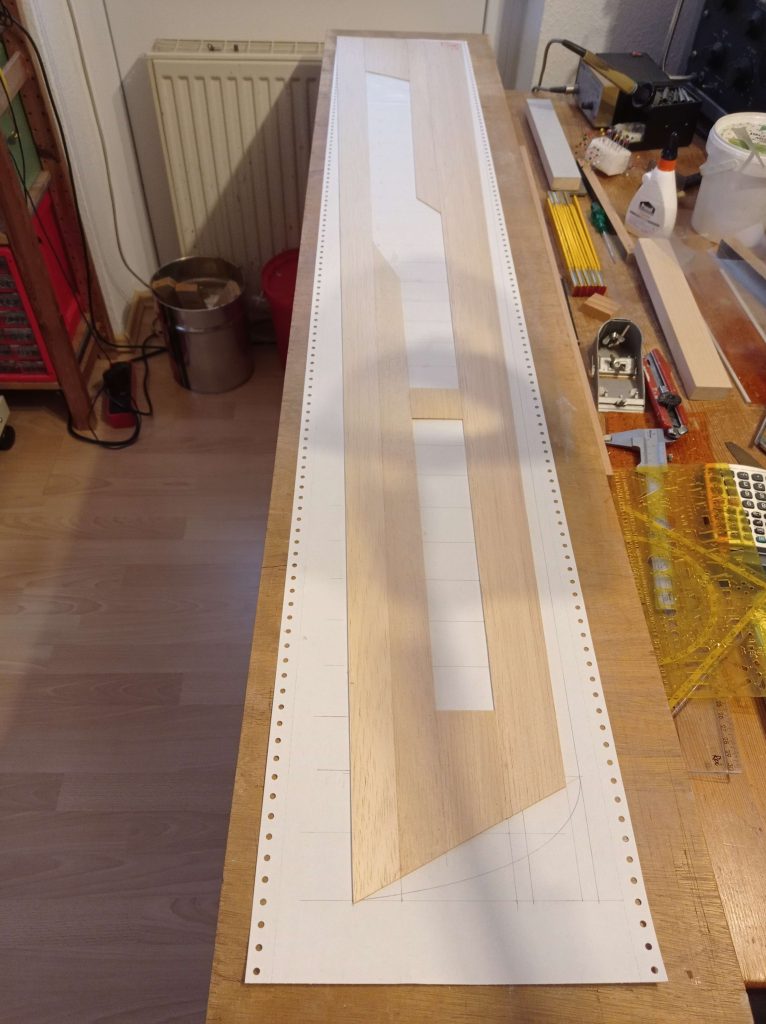 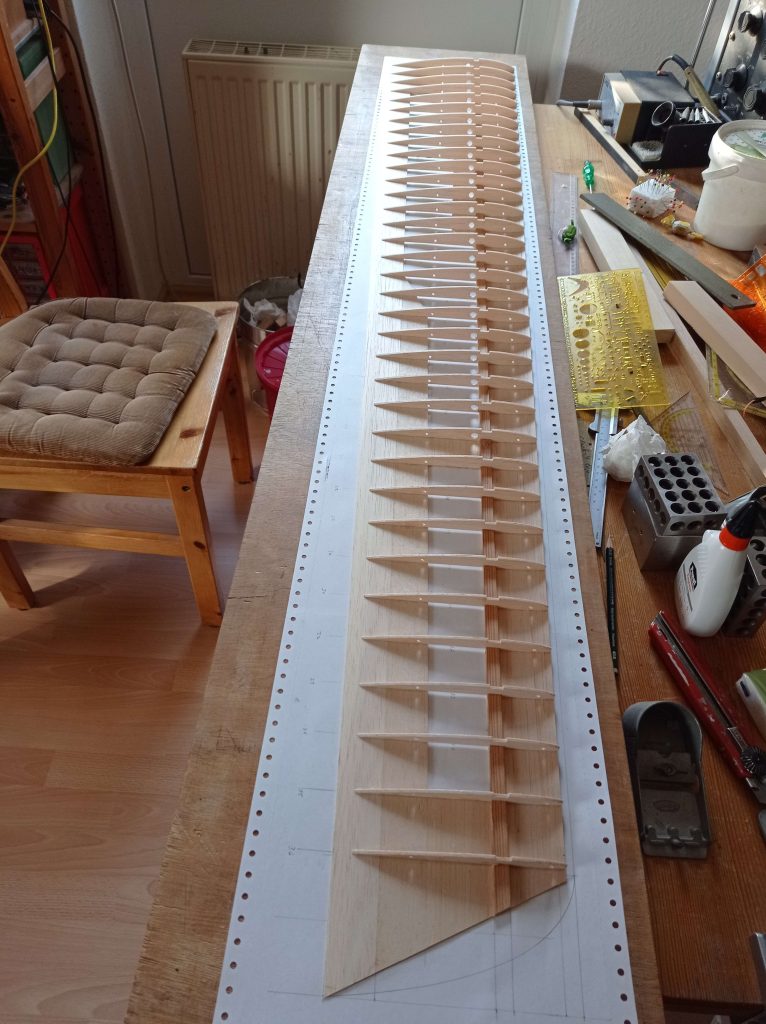 After gluing in the webs between the ribs (balsa 3mm; ~1/8″; vertical grain)… 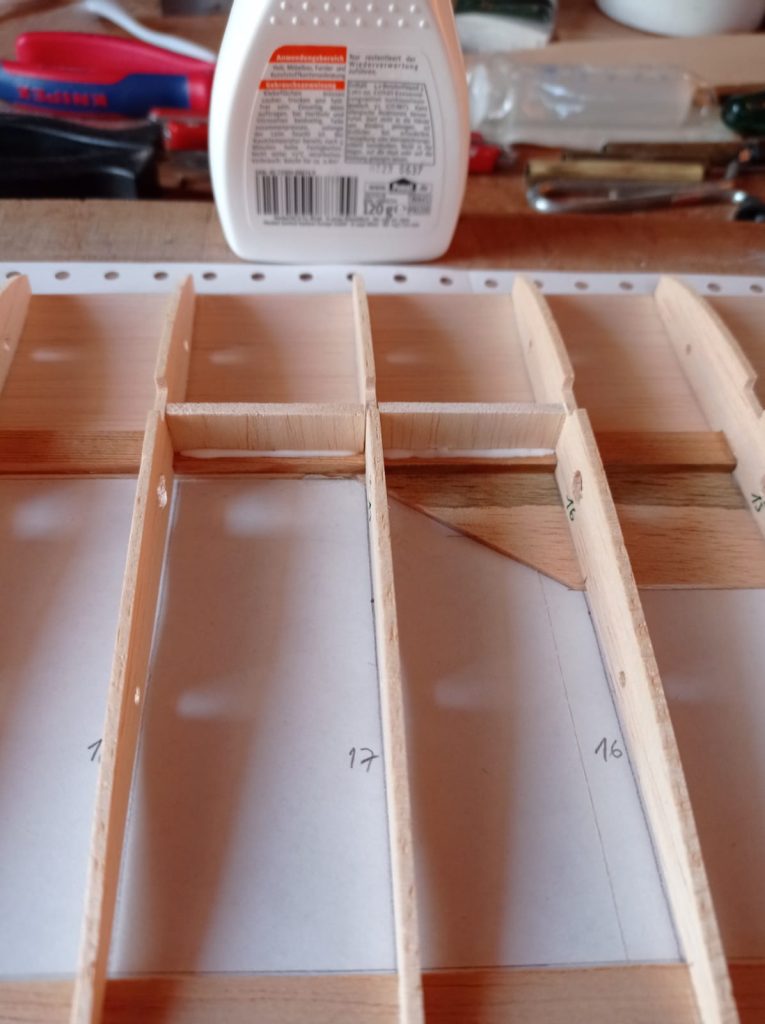 …the upper spar could be added.

In a hidden box in the farthest corner of my workshop I found a pair of spoilers that I had salvaged from an older crashed model). They fitted nicely into my new wings. 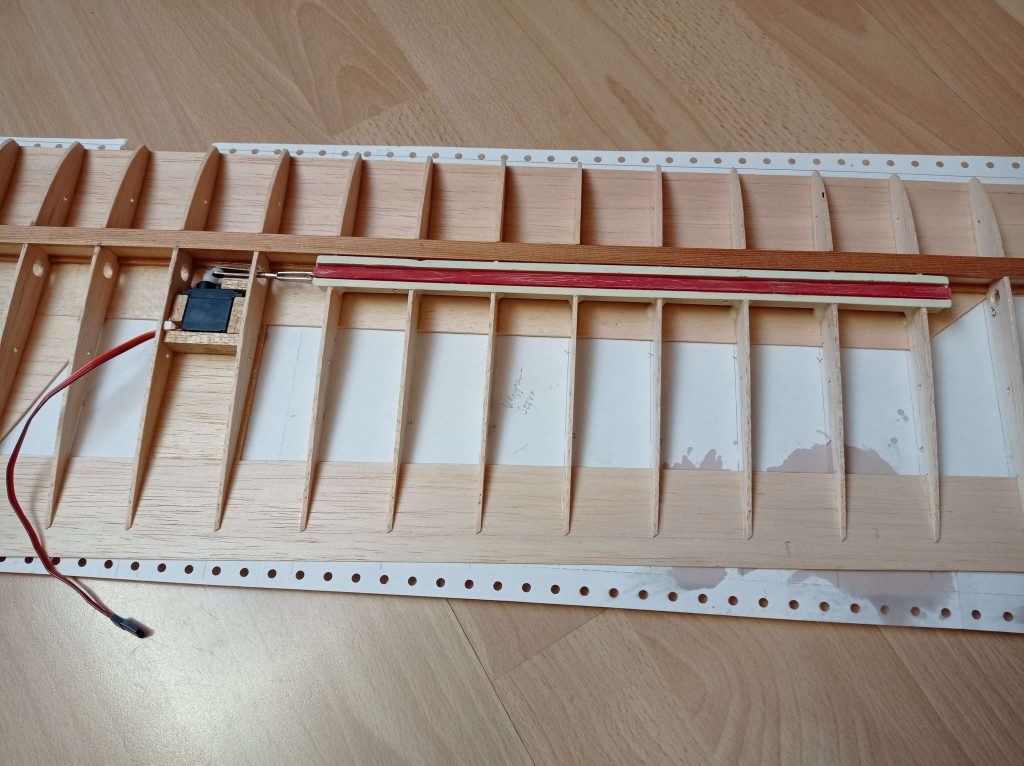 The spoiler servo was permanently glued to the bottom skin between two of the ribs. I used Corona DS939HV servos in all locations.

The webbing between the first four ribs was made of plywood to withstand the strong forces in this area. The wings should be attached to the fuselage with a round steel rod (8mm diameter; ~1/3″). For this I glued brass tubes between the spars at an angle of 3.5 degrees to get the right dihedral for the wings. The cavities were filled with epoxy. A Sub-D socket was attached to the first rib for the electrical connections to the servos. 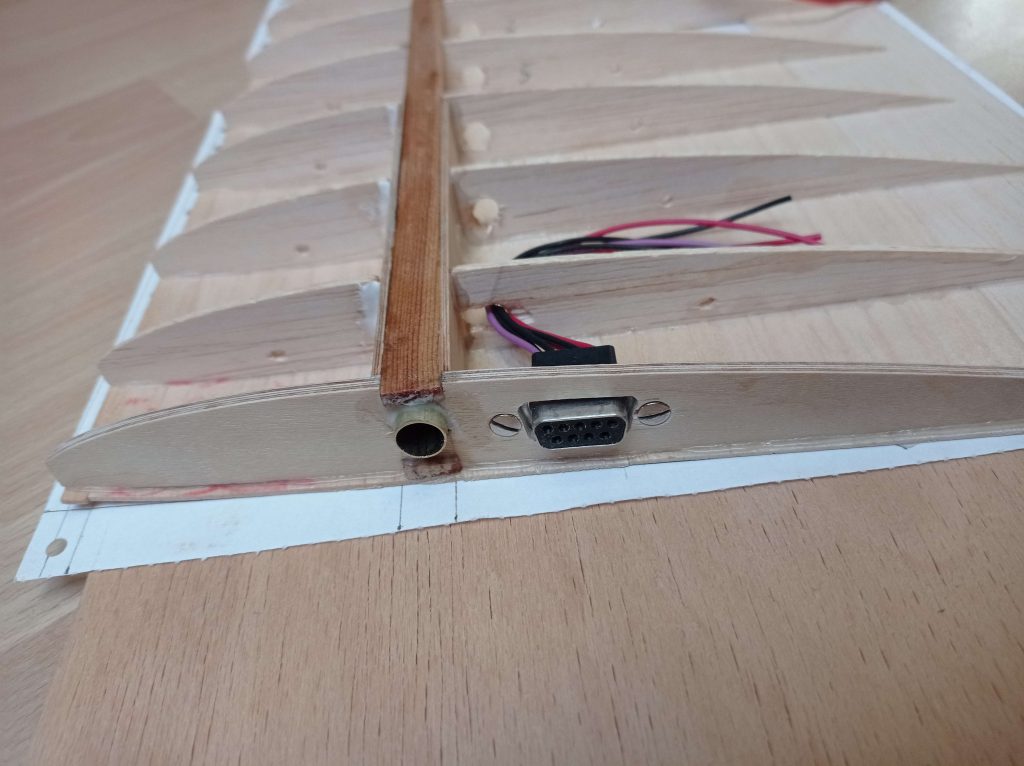 After completing the wiring, the top planking and the rib caps could be glued on. 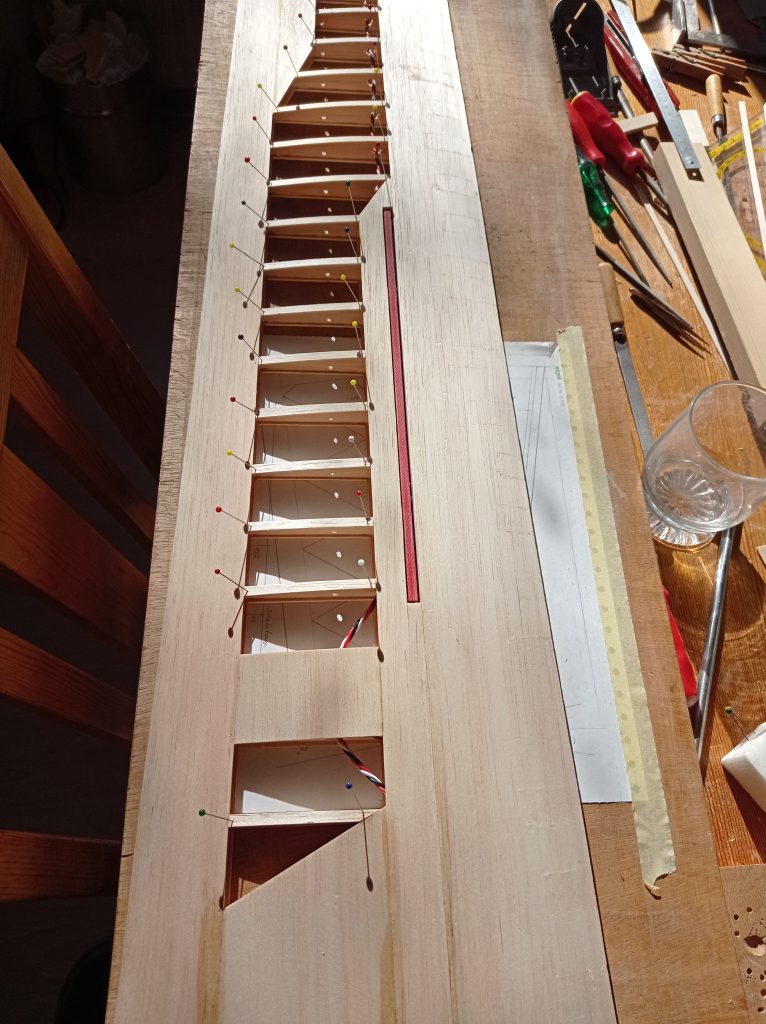 The leading edge and wing tip block were attached and the ailerons were cut out.

As I did not have enough space in my workshop to build both wings simultaneously, the left wing was made afterwards.

Now I made a drawing for the horizontal stabilizer of the t-tail. Depending on the length of the fuselage (distance between the wing and the  stab), I calculated the area of the stab at 7 dm2 (108 in2). A grid of square ribs and a spar were glued together. The narrow spacing of the ribs in the front should prevent sagging in of the skin and the zig-zag arrangement of the ribs in the back should prevent twisting of the stab. The spar was reinforced by a carbon fiber rod. 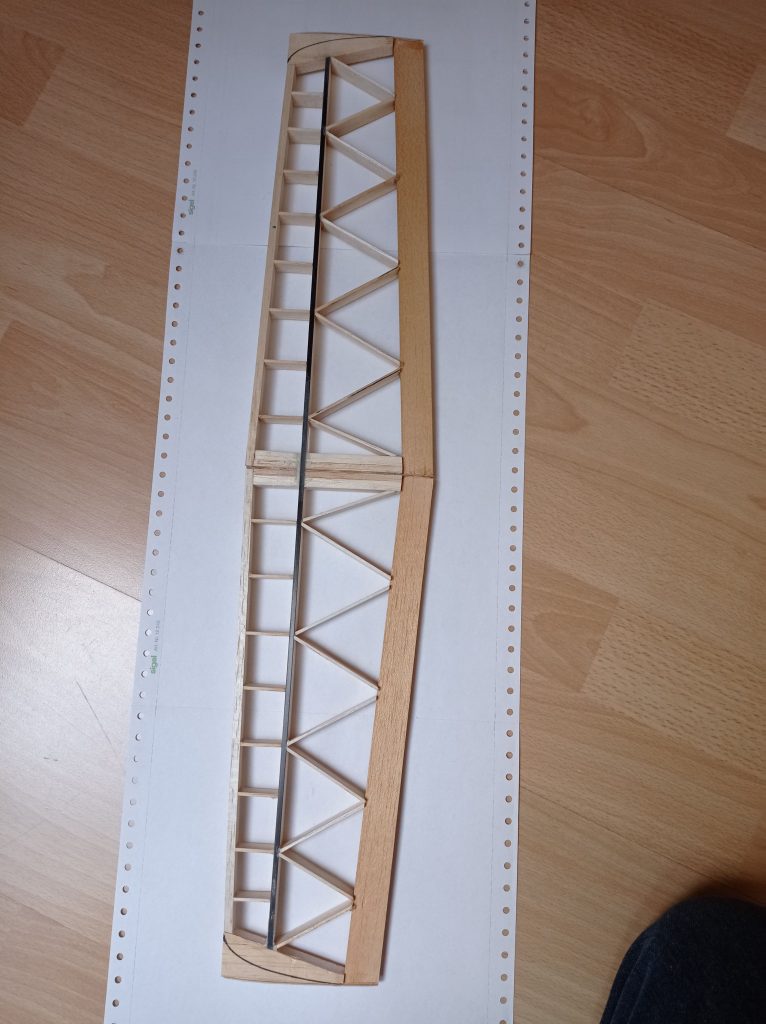 Symmetrical airfoil ribs made of plywood (NACA 0010) were attached and the complete structure was sanded to the right shape. 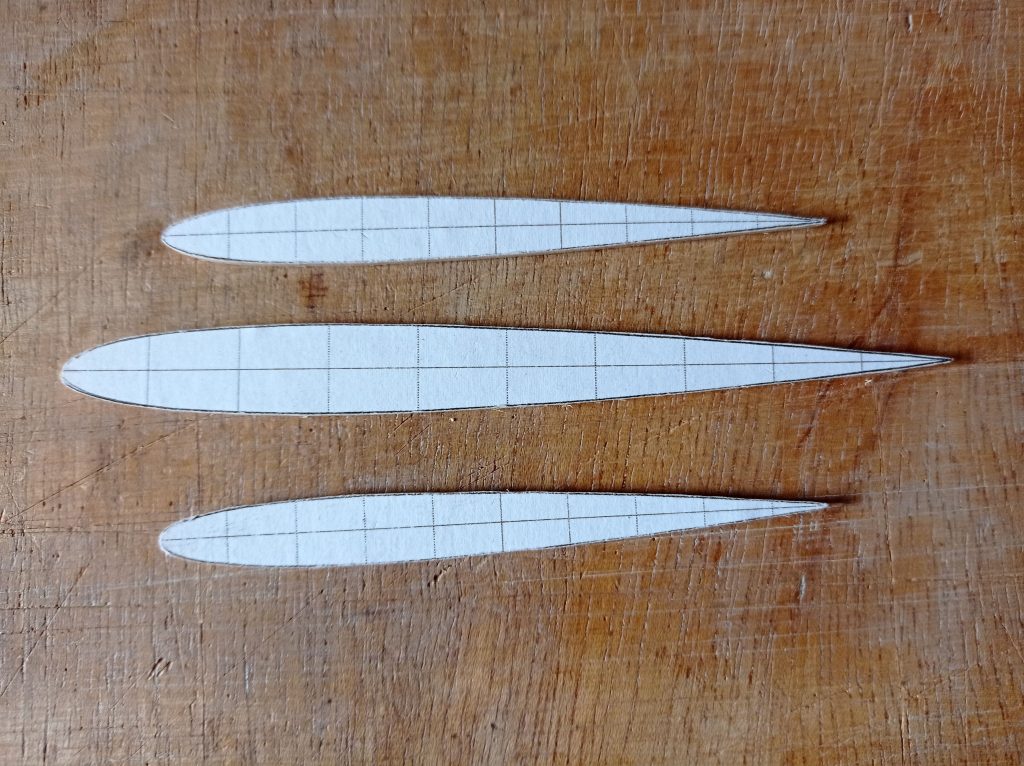 Into the underside of the tailplane I glued kind of a hinge consisting of a short piece of brass tube and a steel pin. 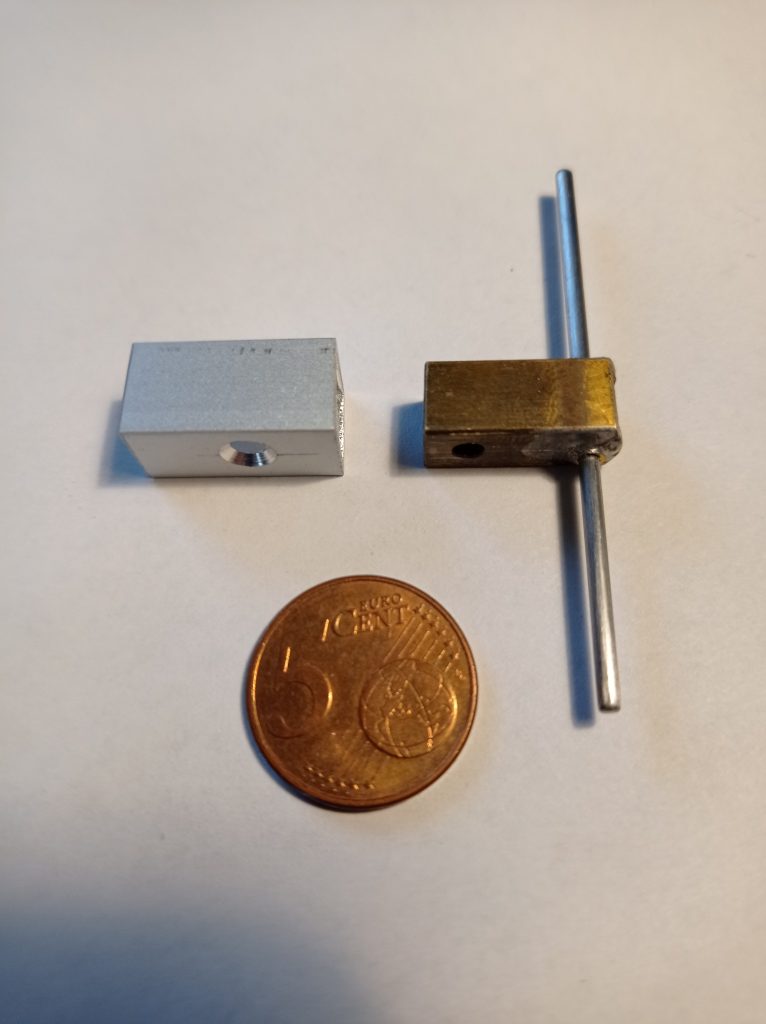 The short aluminum tube was later glued into the top of the vertical stabilizer, where the brass tube is fastened with a small 3mm (M3) screw.

First I wanted to laminate the vertical stabilizer  with fiberglass into a mold that I had received from Horst Baum many years ago. 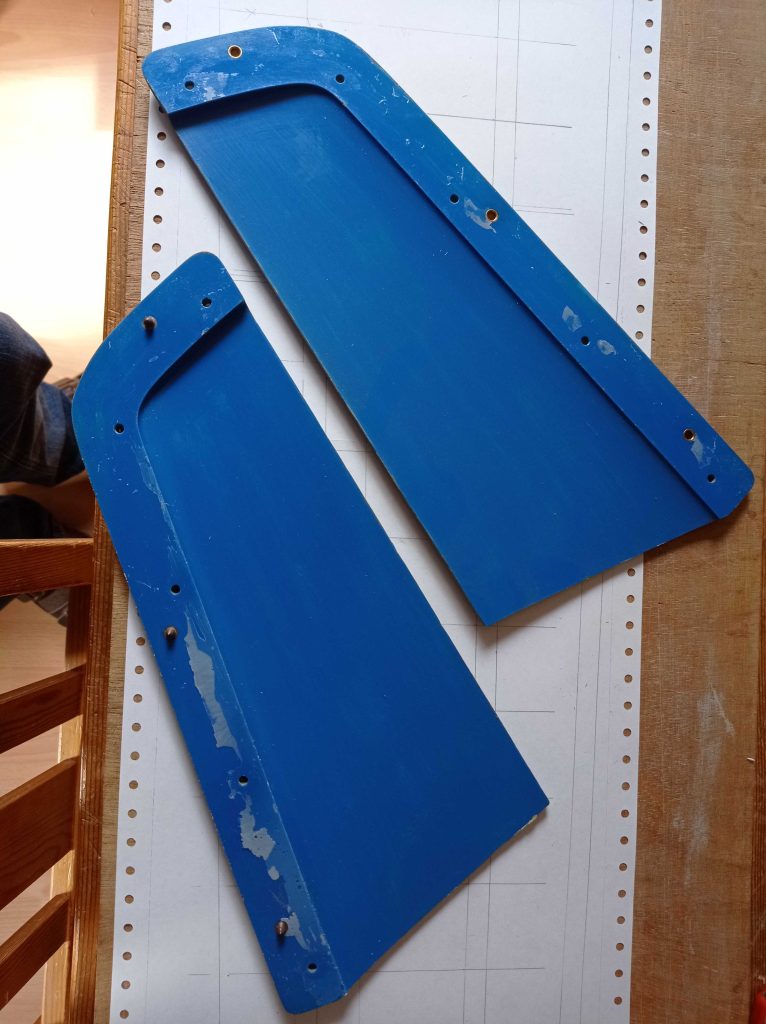 Unfortunately, because of my lack of experience and because I didn’t have a good vacuum pump, this wasn’t successful.

So I decided, to build the vertical stabilizer in rib and plank construction from balsa wood. The skin (balsa 1mm; ~1/24″) was reinforced inside and outside with very light glass cloth. The servo for the horizontal stab was permanently glued inside. The next picture shows the completed vertical stab, including the rudder, glued to the fishing rod boom of the fuselage. The thin wire hook extruding from the top is the end of the push rod coming from the servo. 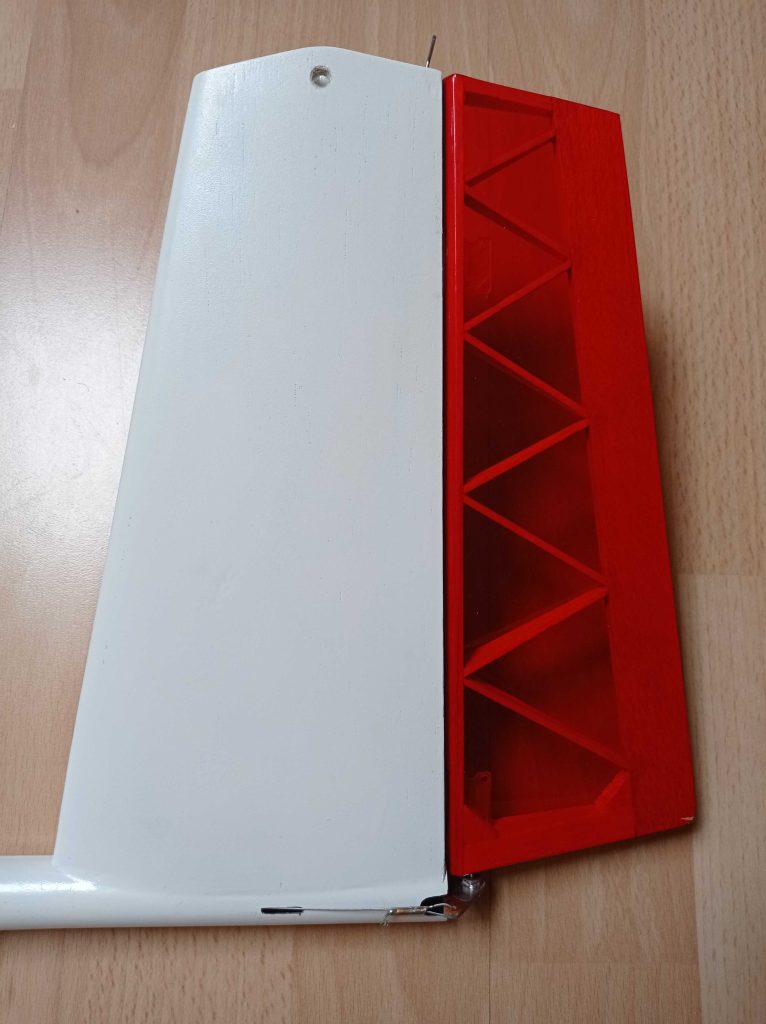 The rudder is operated via two thin control line wires by the only one servo needed inside the fuselage pod. 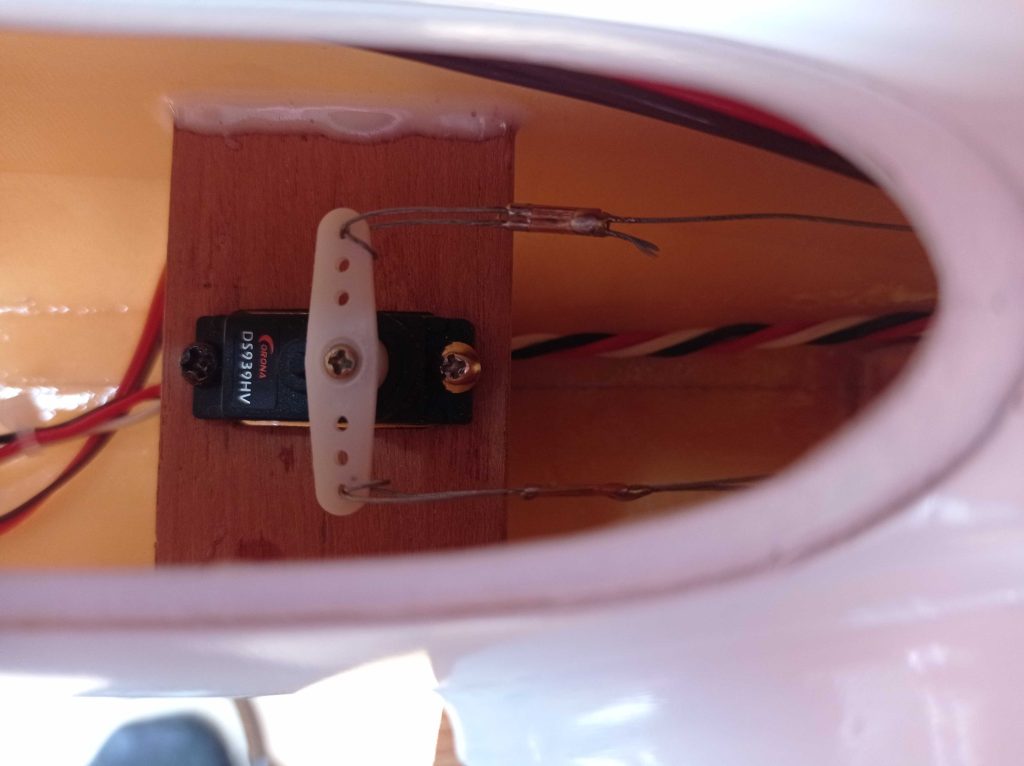 Approximately 200g (7 oz) of lead shot had to be glued firmly into the nose of the fuselage to achieve the correct center of gravity.

The next picture shows the finished model in my garden. 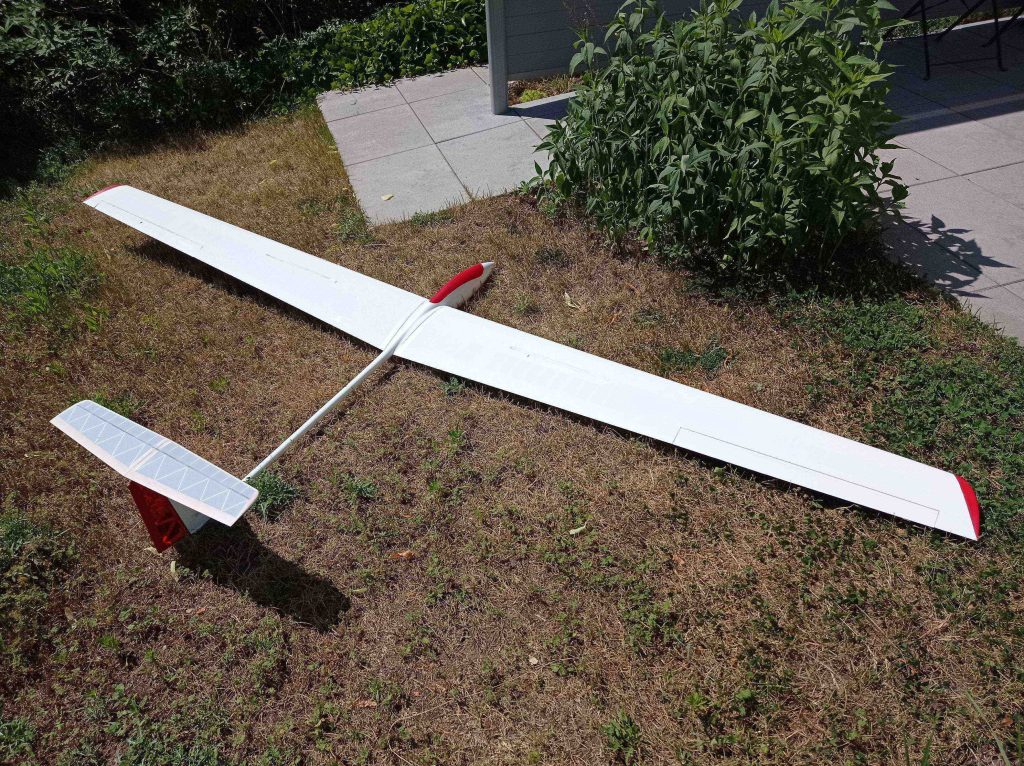 I finished the model only five days before the planned meeting at the Hesselberg. Therefor I did not have the chance to fly it in at home. This would have to be done directly on the mountain.

When my wife and I arrived there, I was overjoyed to meet and greet seven other pilots and their wives. Unfortunately the weather was bad and the strong wind was coming from the wrong direction. Therefor slope soaring was not possible. I did not want to risk my model in such miserable conditions anyhow.

We decided to meet meet again the next day at the local model flying club’s airfield at the foot of the mountain, hoping for better conditions. We didn’t really have a competition, we decided to just have fun and fly as much as possible. With foresight, I had packed my high start towline at home. Joachim Regel also brought one and Christoph Sarter installed his F3B winch.

The next picture shows our group on the Grueb airfield presenting our models: 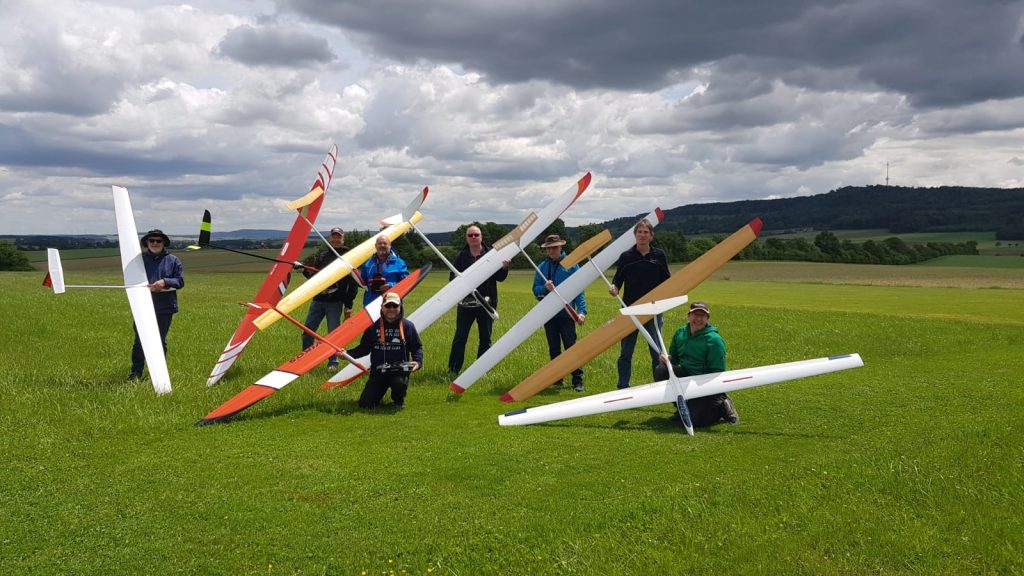 The pilots in the back from left to right are: Me, Stephan Laemmlein, Enrico Vettermann, Frank Neumann, Gerhard Schmidt and Christoph Sarter. Kneeling in the front are Marc Schneider and Joachim Regel. The Hesselberg is visible in the background.

Now my model was flown in successfully and I’m very happy with the result.

In the meantime I have tested the model a lot on the local flying field of the Sportfliegerclub Darmstadt near Messel. The original CG had not to be changed. During the high start the model climbs steeply without any risk of breaking out. When circling in the thermals I realized that a lot of rudder control is needed. The dihedral of the wings is quite high (3.5 degrees per side). So, very little aileron control is necessary. The model seems to dive into the circle easily and needs a lot of up elevator. But that could just be a matter of getting used to it. Maybe, the horizontal stabilizer could be a little bigger. I made some rolls, both against the wind and with tailwind. That worked out well, but the rolling rate was quite slow. So, it is definitely no aerobatic model, and that was not my intention.