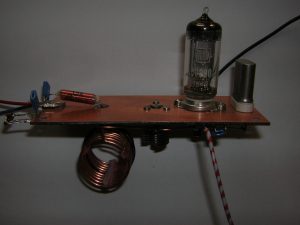 The first time I came across this circuit was in 1961 when I read the book “Funkfernsteuerung für den Modellbauer”. This was a translation by H. Bruss and Hans-A. Pfeil of the English title “Simple Radio-Control” by H. G. Hundleby. The circuit was called the “Aeromodeller Transmitter” and was a free running oscillator without a crystal. I found the adaption to crystal control in the German book “Drahtlose Fernsteuerung von Flugmodellen” (Radio Control of Model Aircraft) by Karl Schultheiss, DL1QK.