Home » Guitar Playing » How I Rediscovered My Guitar

How I Rediscovered My Guitar

After many decades, in 2008, I rediscovered my Yamaha. It had spent its life in its gig bag covered with dust and had been pushed around from one corner to another. Despite the poor treatment she was in relatively good condition. The D-string was broken and there was a small dent in the front binding. After cleaning it and putting new strings on, I tried to play it again. The sound was pretty good and I could still remember some of the chords. But my playing had become very bad.

In the summer of 2008 I attended a classical guitar concert of Heinrich Wittrock in Darmstadt. I really loved his music. At the end of the concert I gathered all my courage and spoke to him. He was very friendly and I asked him if he knew someone who could give me some lessons. I was very surprised when he offered me to do it. We agreed on a date and started our weekly guitar lessons. He showed me everything; that is, he gave me a complete classical guitar training. Now I really learned to understand sheet music. The picture shows Heinrich playing on my 60th birthday party. 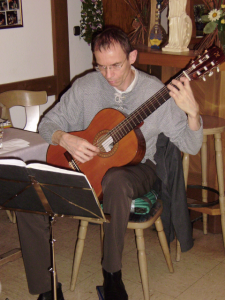